The Queen of Questions

Closer to the fire 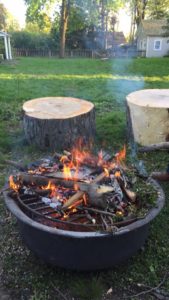 Last year I had several old trees cut down on our property. They were beautiful and still alive but the core was rotten and they were a risk to our 120 year old house. They had to come down. There are now big dark dirt circles marking the place where these giants stood. The largest one was still solid up to about 30 feet. When the men cut it down I had them cut the widest part at the bottom into 18 inch slices. These were placed in a circle in the area that had once been a vegetable garden behind the garage. In the center we placed a metal fire pit.

As you can imagine, we have a lot of firewood. Three generations have spent time cutting, splitting and stacking hundreds of pieces of dry maple. This past Sunday, my favorite person in the whole wide world cleared the small branches and scrap bark from around the massive wood pile waiting to be cut and split. Burning the bark makes a hot fast fire but what we didn’t know was it also makes a very long-lasting fire.

We are careful with fire, coming from Northern California were the Summit Fire threatened an old family homestead and the Sonoma Fire threatened our youngest daughter’s university. When the flames had died down and there was nothing left but low glowing coals we covered it with a screen top and headed in for the night. Monday he went out to empty the ashes for the pick up on Tuesday. But stirring them just a little brought the fire back to life. 14 hours without adding fuel and a cold night had not extinguished the bark completely. Since he had planned on splitting and stacking more wood that day anyway, he kept an eye on it and stirred it occasionally. Again, making sure there were no flames and that the spark screen was in place, he left it around noon. Checking it Tuesday morning, there was still heat and the deep embers were glowing a strong steady red.

As I sat by the fire on Sunday, I was struck by how much I would love to be sharing it with friends who are dear to my heart but far from my home. We used to see each other all the time without much effort. We went to church together or lived near each other or worked together. Now life has taken us in different directions and it takes an effort to connect. While I was sitting by the fire, we kept throwing little pieces of branches or chunks of bark in. We could see the flames and feel the heat. We poked it to move it around and keep air moving through it.

But when we walked away, thinking it would died quietly in the night while we slept, it kept burning. It would have sprung to life with all the flames and heat again in the morning if more branches and bark were added. A couple of pieces of the split firewood, that had been prepared for “someday” would have kept the fire going all day. We didn’t add them on Monday. They are still stacked up for someday.

I don’t want the firewood of friendships to still be neatly stacked against the garage waiting for someday. I want to stir the embers, toss on the logs and share the beauty of the flames and warmth of the fire with friends today. I want to hear the voices around the fire as we share a glass or two or three. I want the sink piled with dinner dishes that can wait until the guests are gone and the kids are worn out from chasing the dogs and each other playing tag way past their bedtimes.

I want to draw closer to the fire and I hope you do to….